I read 8 books in July, and so many were good!  5/8 are 2017 releases. One book made it to my favorites’ list. And dystopias are definitely in right now; 3 out of 5 of the novels were dystopian, and 2 of those came out this year. But I like a good dystopia.

When the English Fall

There tend to be 2 kinds of apocalypse novels: 1) traveling across an apocalyptic landscape and 2) diary of survival at home. When the English Fall ‘falls’ (ahem) into the second category.

The community and religious identity of the protagonist makes this one unique from other survival diaries I’ve read. Jacob’s Amish. He and his family live in Pennsylvania in an Amish community. His daughter Sadie foretells the coming climate-driven apocalypse, which also knocks out everything  electrical. The Amish have obvious survival advantages over their ‘English’ (non-Amish) neighbors. They’ve already acclimated to the lifestyle the coming days and months require. But they’re not ready for the violence of their neighbors, nor will they condone the killing of thieves in the name of ‘justice.’

With so many ‘do whatever it takes to survive’ apocalypse novels, this one provides a breath of fresh air to the genre. It gives a different way of surviving, a way that embraces the humanity in everyone. Also, the author is Amish, and even though I know very little about their lifestyle, it felt authentic to me as I read. I could tell he knew the culture, and I felt like I learned something about that way of life.

I wonder….will there be a 2nd? I really want to know what happens to Jacob and his family, even though I realize the constraints of a ‘found’ dairy mean that’s very unlikely.

Thanks to Netgalley and Algonquin Books for providing me with a free copy in exchange for an honest review.

by Karin Tidbeck years ago, I knew I wanted to read anything of hers published in English. It’s still one of my favorite short story collections. I believe Amatka is the only other one of her works published in the U.S. (she’s Swedish), though I could be wrong.

Amatka is both similar and different than Tidbeck’s short stories. It has the same subtlety, the same unique world building, and the same ambiguous ending (which I loved). I missed out on the lyricism of Tidbeck’s short stories, and I never felt engaged with the main character, Vanja. But I also think Vanja isn’t the kind of person who lets others become fully engaged with her. She holds herself off with only occasional lapses into humanness, which should be more heartbreaking because of how rare they are, but I admit I didn’t find them so.

The dystopian world discourages emotional connections with others as well. I don’t want to go into more detail about the world building, because that aids in the novel’s mystery, but the culture suppresses emotion and creativity — for a reason.

What Tidbeck does really well in this novel is maintain intrigue in the seemingly mundane. Vanja has been sent to Amatka to investigate and report on sanitation habits. Several of her reports are included throughout the novel. What should be a boring investigation is actually quite interesting, and slowly develops into Vanja’s continued investigation into areas she hasn’t been hired for.

Overall, I enjoyed reading it, and would recommend it to anyone looking for unique world building in their dystopias.

Thanks to Netgalley and Knopf Doubleday Publishing Group for providing me with a free copy in exchange for an honest review.

, The Refrigerator Monologues takes a hard feminist look at how women are defined in not only comics, but also in life. In each chapter a dead woman from a superhero universe gets her chance to speak, to tell her story. Yet no matter how different their personalities, these women all made the same mistake. They lost their identities by helping the men in their lives.

And guess what? I know a lot of women who do that. Though most of the time, I see it with their children, not their spouses. But many women struggle with the problem of ‘helping’ people to the point of no longer helping herself.

I know very little about superhero comics. I watch Arrow and Flash. I’ve watched the Batman movies, and Wonder Woman. I’ve tried others, but found them boring. I’ve attempted to read superhero graphic novels, but am inevitably disappointed. But that’s, in part, because the women are refrigerated. And also all the characters seem to lack depth, in general, to me. Because of my limited knowledge, I didn’t get all Valente’s inside clues as to who these women really are. I know they correlate to superhero characters, because I read an interview with Valente where she said that, but I’m just not knowledgeable enough about comics. However, that didn’t stop me from enjoying the book.

The Hate U Give

This is such an amazing novel, receiving a lot of well-deserved attention.

In case you’ve missed all the novel’s hype, 16-year-old Starr witnesses a cop murder her friend Khalil. She’s the only witness. And when the media starts portraying Khalil as a stereotype, and her neighborhood rises to protest his death, Starr decides she needs to let the world know the Khalil she knew, and her story of the shooting.

Meanwhile, Starr is struggling with friendships as the only black girl in the school she attends as well as her relationship with a (fantastic) white boy who goes to the same school. She has one voice when she’s in Garden Heights, and another at school. And then she’s got such a rich and wonderful family; I loved them all. It’s fantastic to see a YA novel with loving, caring parents, and especially a black family (since the media often portrays black families as ‘broken.) Starr’s dad is a Black Panthers’ fanatic, and wants to rebuild Garden Heights, starting with his grocery store. Her mom is a full-time nurse and has such a wonderful sense of humor. Her little brother is a brat, as all little brothers are, and her half-brother Seven is part brat and part protector. Uncle Carl is a police officer who loves them as his own. So Starr knows not all officers see a black man and assume his life is worth less than theirs. Her uncle isn’t like that, but that doesn’t help her anger.

Angie Thomas is a stellar writer. You could really hear the characters’ voices, and the pacing is fast but also nuanced. This is one of those books I think everybody needs to read.

Night of the Animals

Well, that was weird! And I like weird. But the pacing was weird too, and while I dig weird content, it rambled in some places, and breezed over really important developments in others.

The main character, Cuthbert, is a 90-year-old addict who hears animals talking. And he’s convinced his long-dead brother Drystan is an otter. In this future dystopia, animals are rapidly becoming extinct, and to make matters worse, a pervasive suicide cult tries to kill off the remaining animals. The animals ask Cuthbert to release the animals in the London Zoo, which is the last remaining zoo.

Interspersed with Cuthbert’s story is that of Dr. Bajwa, his psychiatric doctor, and Astrid, a police inspector.

In the beginning the pace is sluggish, with flashbacks to Cuthbert’s childhood, his struggles with Flot addiction, and his visits with Dr. Bajwa. It takes FOREVER to get to the zoo breakout. And then suddenly all the plot developments happen. Astrid and her motivations are given cursory explanation, and then once she and Cuthbert start interacting it’s like reading an acid trip (I guess. Not really speaking from experience here!). But some things really needed development.

And what’s with the footnotes? I could easily understand all the footnoted terms in context.

I don’t regret reading this. I enjoyed Cuthbert as an unreliable narrator, and I actually wish the authorial voice had stepped in less often during his pov chapters, so I could fully question what was real vs. what Cuthbert imagined was real. Cuthbert is a loveable guy, and I enjoyed his character. I also love animals, so that was fun. (Though some of the philosophical discussions with Muezza the sand cat could’ve been cut.)

The New Voices of Fantasy

An excellent collection of contemporary fantasy short stories. I’d already read 8 out of the 19 stories, but I enjoyed rereading them. I’d also already read 15 of the authors, so it’s nice to know I’m keeping up with new fantasy authors!

If you’re on the hunt for some new authors, this is a great collection to read. It’s also interesting to note that of the 19 stories, only 2 were 2nd world fantasy. The other 17 stories were rooted in this world. But what all of these stories tend to do is use fantasy as a metaphor for something about living, and I love that. There are some really powerful stories in this collection. You can also check out my reviews of each story. Many of them are excellent.

Wow! It’s hard to even know where to begin reviewing this collection. I started reading it in 2015 for a group read, and finished about a third it then. I set it aside meaning to return to it, but never did. At the start of this year, I decided I would read 10 fairy tales from it between every print book I finished. And 7 months later, I’m finished! I enjoyed the process so much I’m going to start doing that with another fairytale collection.

And I literally read it to pieces. Both the front and back cover have torn off, and now a chunk at the beginning fell out. I’m going to have to upgrade to a hardback version!

So much fun and weirdness. 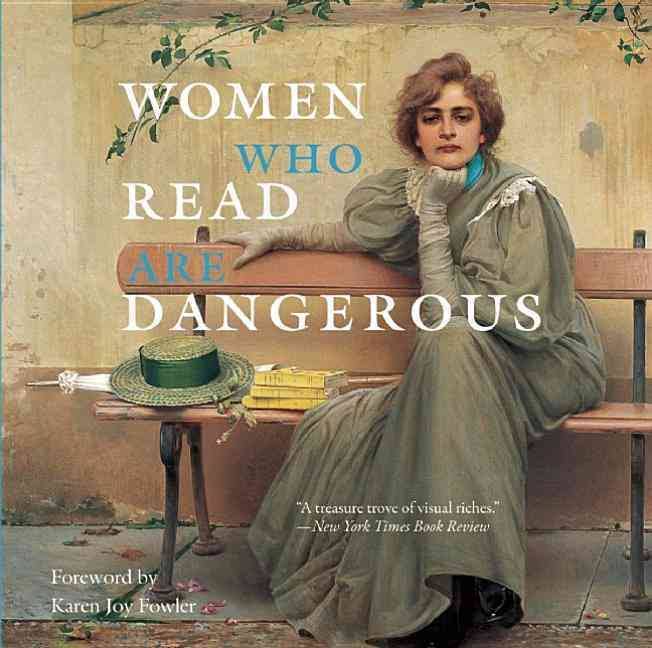 Women Who Read Are Dangerous

More than anything, this is an art book. The forward by Karen Joy Fowler provides a general overview of the history of women who read, while the rest of the book shows artwork that depicts women with books, and a brief commentary and interpretation of the art by, I assume, Stefan Bollmann. I did not always agree with his interpretations, but I loved looking at the art and making up my own stories about the women painted, and how the painting came to be. That’s what drew me to the book in the first place. It would make a really great coffee table book.

What good books did you read last month?