by Mohsin Hamid. Published March 7th 2017.  Wow. This is such an amazing book. It will probably end up on my end of the year favorites. In an undisclosed war torn country (I pictured Syria, especially after watching this mini-doc about the Syrian refugee crisis), Saeed and Nadia fall in love. Both are students at a local college, and even as war and in-fighting threaten to tear their city apart, they’re drawn to one another — Nadia, independent and alone; Saeed, religious and familial. And then doors begin leading to other places. A door to a closet might suddenly open to Australia instead, or London, or Greece. With their city no longer recognizable as theirs — and losing friends and family — Saeed and Nadia decide to enter one of these doors, and become refugees. This is such a bittersweet, human story. I recommend reading it in 1-2 sittings. It’s a fast read, and it’s easy to become swept into Hamid’s lyrical prose. Despite the war, loss, and grief the characters experience, it’s still a hopeful read. It makes me think that maybe the world can be a better place; that we can learn to all be human together. 4.5/5

by Marisa Silver. Published in 2016. A couple finally conceives with the help of gypsies, but their daughter isn’t what they wanted. Pavla is a dwarf. After several years both parents finally learn to love their daughter, but not enough to love her as she is. They want to change her into ‘normal.’ What follows is a series of transformations and forced exile as Pavla moves from a traveling circus to a pack of wolves to a prison. Along the way her story becomes entwined with Danilo, or rather, his story becomes entwined in hers. When Danilo’s twin brother dies, his parents force him to leave, and like Pavla, his exile leads him to wonder aimlessly from place to place. The first 2/3rds of the novel were enthralling, but part of the problem with a novel like this is every time I became wrapped up in the story, something would change and I was in an entirely new story. Thus, by the end of the novel, I was experiencing readerly jet lag. I just want to discover more about each part, not have the story start all over again. And the first three settings/transformations were far more interesting than the final one, to me. I would still recommend this to those who enjoy weird novels. Definitely worth the read. 3.5/5

by Laini Taylor. Published in 2011. Karou was raised by Brimstone, a chimaera who looks like a devil, in his magic shop that opens between worlds. Some doors open into the human world, where Karou goes to art school in Prague and also collects teeth for Brimstone. Another door opens into Brimstone’s world, and she’s not allowed to enter. Karou’s life changes when angels descend to her world, and begin marking the doors with black handprints. When she spars with the angel Akiva, sparks fly–both from anger and from love. Daughter of Smoke and Bone reads fast; each chapter kept me on the edge of my seat. It’s also not a black/white, good vs. evil narrative, which is refreshing for YA. The ‘love at first sight’ and ‘our love can save our kingdoms’ plot lines are a little silly to me, but I’m sure appeal to a lot of people. I’m just the kind of person who likes more nuance in love. It ends on a cliffhanger, so I’ll eventually have to read the next one in the trilogy. But it’s not high on my priorities. 4/5

by Colm Tóibín. Published May 18th 2017. A re-imagining of the events that follow Agamemnon’s return home, the novel rotates perspectives as each player contemplates their rage, grief, and revenge — from Clytemnestra to Orestes to Electra. Tóibín’s strongest voice is, unsurprisingly, Clytemnestra’s. Her grief and rage is the strongest, after all. The other characters fall flat in comparison, their personalities pale shadows to their mother’s. They lack motivation, drive, any kind of desires. Tóibín modernizes the myth by taking the gods out of it. They’re mentioned, but only in terms of this being a time when the gods have passed; they no longer participate in human lives. An interesting choice, though it takes a little bit of the magic away from the story, which I think was the point. What you have left are characters delegated to the periphery of events , trying to find meaning in the absurd violence that surrounds them. It’s a good retelling, and my first book by Tóibín. Thanks to Netgalley and Scribner for providing me with a free copy in exchange for an honest review. 3.5/5

by Su Bristow. Published May 1st 2017. The most popular selkie legend goes like this: A man finds a group of women dancing by the sea, with sealskins beside them. They flee when they see him, slipping into their skins and swimming away, but he keeps one skin, and brings home a selkie wife. Without her skin, she cannot leave. She bears him children, and when they’re older the children find where he’s hidden the skin and show it to their mother. She takes the skin and returns to the sea in her true form as a seal, abandoning her husband and children. Bristow’s retelling focuses on the man who steals the skin, Donald, a Scottish fisherman. It’s easy to hate the men in selkie legends, but Bristow humanizes Donald, showing his struggles with guilt, his history of being bullied, his deep regret. Donald and his sealwife’s building relationship is well-written, and it’s a very atmospheric read. I sank into the world. But while I like redemption stories, I have issues with this particular type, and you can read my spoilery review of that on Goodreads. Thanks to Netgalley and Orenda Books for providing me with a free copy in exchange for an honest review. 3.5/5

Music of the Ghosts

by Vaddey Ratner. Published April 11th 2017. This is one melancholy book, as it would have to be. Almost 40 years have passed since the genocide of the Khmer Rouge regime in Cambodia. Teera, who escaped with her aunt to the U.S. as a child, now returns to Cambodia, haunted by her past and struggling with grief after her aunt’s death. A man called The Old Musician claims to have several instruments of her father’s, and wants to return them. The novel weaves between their perspectives as both grapple with the past while trying to find hope and meaning in the present. While this is a melancholy novel, it’s not a hopeless one. In her afterward, Ratner says that if In the Shadow of the Banyan

is a story of survival, than this is a story of surviving. I did enjoy In the Shadow of the Banyan more because of how it weaved mythology into the narrative, but Music of the Ghosts is a strong follow up, and many will enjoy it more than her first. Thanks to Touchstone and Netgalley for providing me with a free copy in exchange for an honest review. 3.5/5

by Ellen Klages. Published May 16th 2017 (my birthday!). I’ve never read Ellen Klages before, but the short stories collected here are so good! I’m surprised I haven’t come across her before. The stories I liked best captured what it feels like to be a child. My favorite of these is the very first piece — “The Education of a Witch” — about a little girl who identifies with Maleficent more than Sleeping Beauty. I also enjoyed “Woodsmoke,” about two girls at summer camp. Overall, Klages stories are grounded in realism, with hints of the weird or strange. They’re sweet and powerful and fun, and I’ll be seeking out more of her work. I’m thankful to Netgalley and Tachyon Publications for providing me with a copy in exchange for an honest review. You can read my take on each story here. 4/5 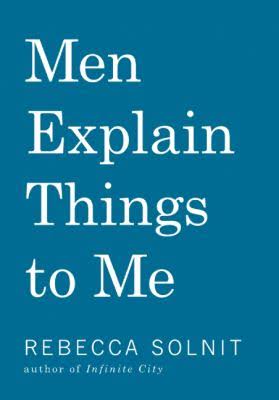 Men Explain Things to Me

by Rebecca Solnit. Published 2014. I didn’t mean to read this immediately after buying it. I often read the first paragraphs of new books as I place them on the bookshelf, but this time I didn’t stop reading. Her prose style is mesmerizing. It’s a powerful collection of feminist essays, and I highly recommend reading it. You can read my longer review on Goodreads. 4/5

Expecting Better: Why the Conventional Pregnancy Wisdom Is Wrong–and What You Really Need to Know

by Emily Oster. Published in 2013. I picked this up after reading several reviews describe at as ‘if you read a single pregnancy book, this should be the one.’ And I completely agree. THERE ARE SOURCES! I swear, it never occurred to me that the vast majority of pregnancy books would cite no sources whatsoever. I don’t care if you’re a doctor. Lots of people call themselves doctors and I’m not going to take their advice. On top of that, pregnancy books often say things like “Ask your doctor.” I’m reading this so I can go to my doctor’s appointments informed. Don’t just tell me to talk to my doctor. Why bother reading a book then? Anyway, Expecting Better is written by an economist. She was similarly frustrated by the lack of evidence given in pregnancy books, or even by her doctors. She decided to research the main questions so she could make informed decisions. In each chapter she presents multiple case studies and weighs all the different decisions new parents can make. She doesn’t tell you whether you should or shouldn’t get on epidural, or drink coffee, etc, but rather what research shows so parents can make their own decision. So far, this is the only pregnancy book I’ve read worth reading. 4.5/5

by Armin A. Brott and Jennifer Ash. Published in 2001. I bought this book for Ryan as we’re expecting our first baby. We both read it. I found it generic, he found it insulting and humorous. Here are some of his favorite tips for dads:

Frankly, Ryan found the book insulting. He doesn’t need lame platitudes and the casual sexism that says ‘you’re a male hero for doing the things that you should be doing.’ When I asked for his review, he said “terrible.” I also read this book, and found the information to be generic and easily found online. I agree that it’d be nice if there were a book for dads, but it needs to be researched and informed and to treat parents with respect. 1/5

Your Pregnancy and Childbirth: Month to Month

by The American College of Ob/Gyn. Published in 2010.  You can find the exact same information in this book on websites. My favorite websites so far are Baby Center and The Bump. The book contains generic, easily found basics. No need to read it. 2/5

What were your favorite reads in May?